Day 3 of the pre contest was Sunday and it dawned an absolutely beautiful day with most of the high cloud from yesterday gone and the sun doing its job from before we were awake.
Frankie was first up and his was an important flight as he needed a solid score to move up to make the finals. His launch was a little short in fairly easy air and he soon hooked up for an uneventful flight and made a 99 landing to give himself a great chance to make the final 12.
Jody took a fast tow and turned to the right to a read that eventually petered out so he limped back over the tent area at under 50 feet to find a tiny bump which he began to turn slowly. Inch by inch his Xplorer rose and after 10 turns he had gained a couple of feet after 20 he was at 100 and by the time he was 8 minutes out the lift had developed to speck him out. It was a great save and he returned to make a nice 99. His time of 9:55.94 gave him a 999.9.
Gordon took a very short tow and ran downwind to great air for an easy out. The wind direction had changed to force a steeper landing across the tents and he was a little early for a 9:56 and 98.
Dillon was last to fly using his 4m X2 and he also took a really short tow in the great conditions and had a leisurely time specking out.
On his return to the LZ, Dillon executed a textbook approach to the clock hitting the 100 with less than .25 secs to go.
The time was an amazing 9:59.3 – 100 which is close to being a record. The CD and the time keeper were very excited and wanted photos of Dillon and the time piece. It was indeed a great flight and was a fitting end to our pre contest campaign with the pilots putting in some great final round performances.
Once the results were posted for the prelims we were bummed to find Frankie had moved up as expected but was one spot short of the finals in 13th place.
The prelims were won by Joe Wurts with Arijan Hucaljuk of Croatia 2nd and Thomas Truffo of Italy 3rd. The remaining 12 finalists were Jan Littva of Slovakia, Martin Rajsner of the Czech Rep, Scott Chrisholm New Zealand, Robin Galazea of France, a junior Jethro VanDer Molen from Sth Africa, Marco Generali of Italy, Jacques Huret of France, Primos Rizner of Slovenia and Makarov Volodymyr of Ukraine.
The two 15 minute fly off rounds started with every pilot taking short tows and running downwind to the easy reads we had experience all day. It was purely a fast tow landing contest which was eventually won by Ariijan with Thomas Truffo 2nd and Martin Rajsner and Jan Littva equal 3rd. A count back gave it to Jan.
The contest was concluded with a prize giving ceremony and the teams than went about preparing their models for the official inspection. The inspection area was very busy with hundreds of models coming and going to be stickered and processed. It was a great opportunity to look at all the competitors airplanes in one small area. Once processed the team headed for the hotel to clean up and prepare for the opening ceremonies. 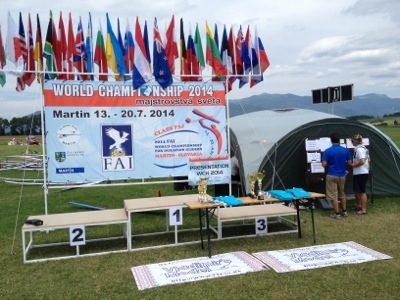 The opening ceremony was held in the Town square of Martin and each Team was presented to the crowd as the marched into a roped off area where we Then watched a local traditional dawning display and various acts regarding the history of the area.
It was very hard on backs and legs to stand for nearly 2 hours so we were all relieved when it was stopped abruptly because a fire eaters beard caught on fire he was OK but clearly in pain as he walked off.
Tom and Gordon went to the managers meeting as the rest if the Team returned to the Hotel and had dinner.