Wednesday is forecast more of the same weather with afternoon storms. The morning showed some high cloud and a light Noreaster to greet the guys practising off bungees
Chris was first up in Rd 6 and the air was very light but he made his time along with all his group. His landing got a little behind at 10 secs so he had to hurry and finished up short of the hunski with a 95.
Jody flew second and as the two models going left got pounded he pushed right to find air and took it out high and deep to the right side .
Jody made a text book approach and landing for a 9:55 – 100 and took the 1000.
Daryl got off 1st and took ripping air for an easy flight and backed it up a little early with a 100 but good enough at 9:54.65 to take the 1000 also.
With Rd 6 complete And Daryl and Jody with 1000’s Daryl was in 1st place on 5993 and Jody 6th with 5990. Chris continued to move up with his6904 putting him in 33rd. The combined team scores now show USA in 4th just 30 points off Australia in 3rd. Italy is second 20 points further ahead and New Zealand is 1st 52 points ahead of USA.
The day was developing into a boomer with about 10 to 12 mph winemaking the ride home difficult if you didn’t buy your ride.
Dillon flew in group 1 of the juniors and though we took a minute or two to find a ride we stayed close to he pack and checked our on top of the group. Dillon flew his 3.8X2 and like Jody he judged the landing perfectly for a perfect 100 and a 9:55.5 for another 1000.
Dominic’s flight was In a tough piece of air that saw all pilots except two relaunching. Fortunately Dominic was the first to do so and we were really hoping they would all have to relight. His 6:34 – 99 yielded him 785 points and that will now be his drop.
Tristan took a super launch, recognized the good air he was launching in and took it out for an easy ride. His landing was a beauty and yielded a score of
998.1 with a 9:52.7 – 99.
The boys are really hitting their straps and the real fight will be on once the drop kicks in after rd 8. 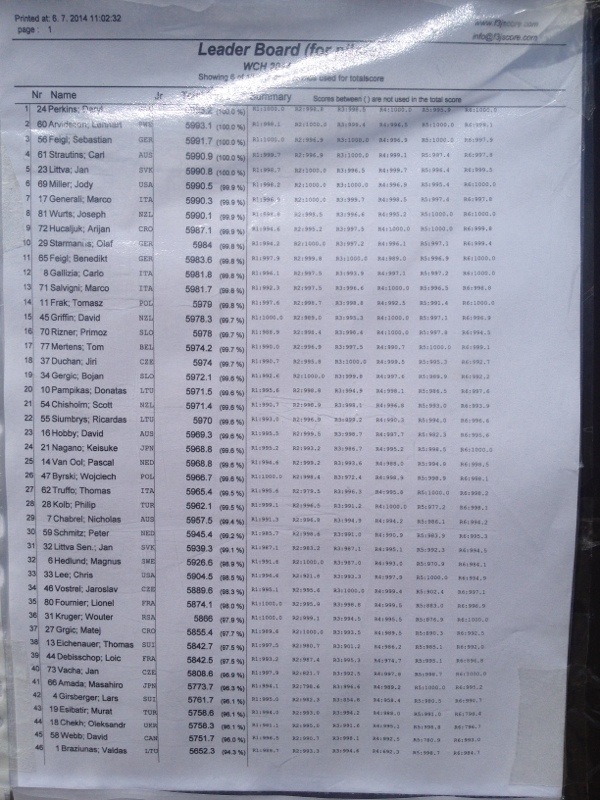 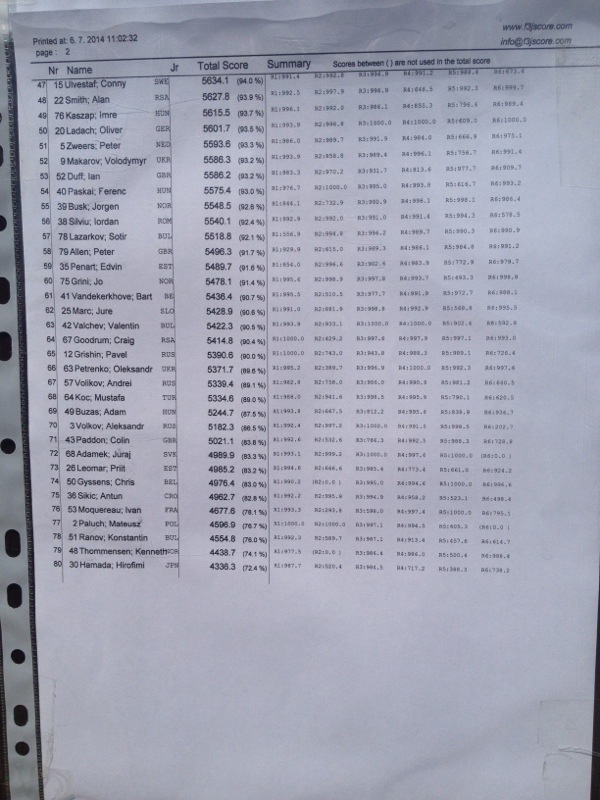 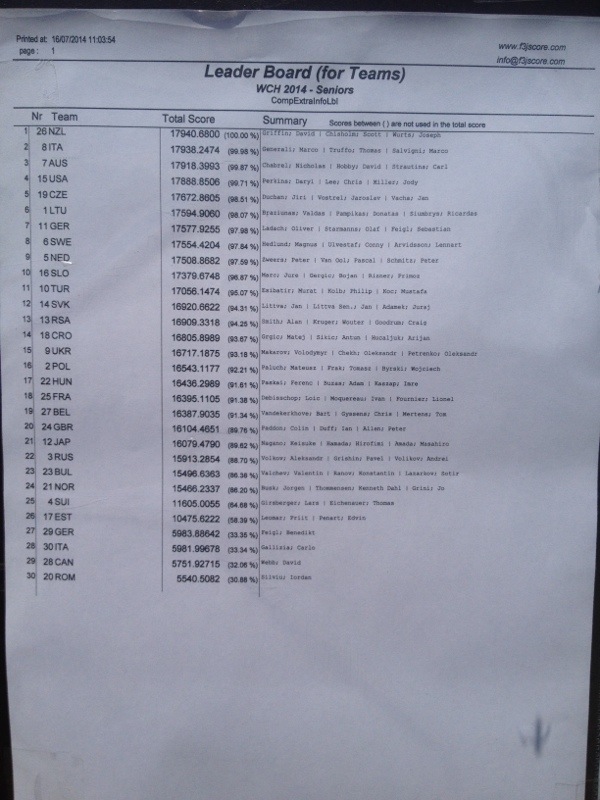 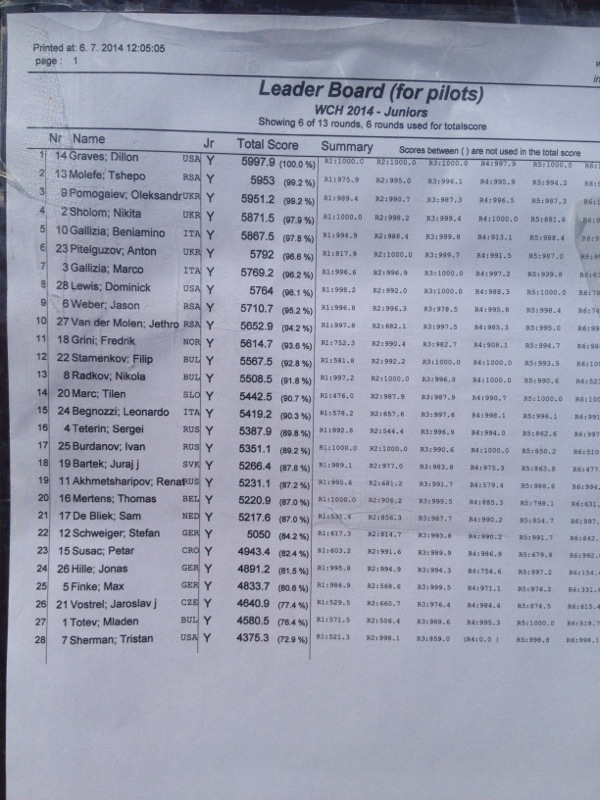 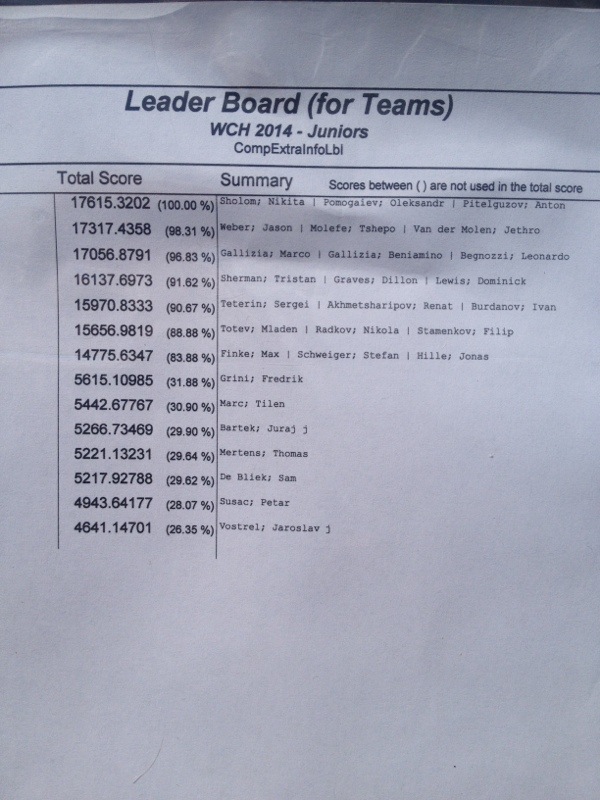 Round 7.
Jody’s second flight of the day saw enough wind for him to add 2 brass to the 3.5X2 and the additional legs were a real asset coming home from the long downwind run he made to get his time. In the LZ he was a little late entering a little late turning and needed to rush to get back on time as he braked at the spot the model ended up too slow and without energy to dork his model slid through for a 96. The flight time was a respectable 9:53.8 but the landing lowered his score to 994.3.
Chris followed Jody back to back and his launch was I great air for an easy ride and return to the LZ. He landed safely a couple of seconds early for a 9:52.3 – 98 and a score of 995.5.
Daryl also had an uneventful flight in lift sink conditions and hit the hunksi in a great landing to earn another grannie for the Team. His time was 9:55.3 – 100 for a 1000.
That was the completion of Rd 7 for the seniors.
The leader Board showed Daryl in 1st place .1 of a point ahead of Lennart Arvidsson of Sweden with JW in 3rd 4 points further back.
Jody is sitting comfortably in 8th – 9 points from the lead and Chris has even steadily climbing the ladder into 30th.
The spread is now 15 points covering the top 12. The USA team is in 4th place just 27 points behind Australia 3rd and 49 points off Italy in 1st.
The drop kicks in next round and then we will see where we really sit.

Dominic was first up in the junior round 7. He fought the good fight in air that had become quite fickle with long periods of mushy air that saw models falling out everywhere in some of the previous rounds. As it was in Dominic’s, but he took air back to the corn and when that fell apart he found new air to make the time while others in his group landed early. Dominic made a super landing to take the group and score a 1000 points with a 9:53.8 – 99
Tristan was next away and he went downwind in decent air but never really made it work enough to buy his ride home. He had the model ballasted at 71oz and could move around and though he tasted some different bubbles it wasn’t enough. He made it back within the 75m for a score but took a zero landing just 6.5 minutes in to record a 6:33.6 – 0 for
Dillons flight was immediately after and we launched his light 3.8 X2 at 65oz in much different air where we launched well, went forward and never took a turn for 8.5 minutes staying cambered up and going up. Dillons landing was one of his classic approaches where he was early at 6 seconds out and he flared up and held momentarily before continuing on to drill the tiny carpet square less than .5 sec before the horn. The models nose was nestled against the nail under the 3″ square piece of carpet marking the spot. His 9:54.2 – 100 took the round for another grannie.
Shortly after Dillons flight the storms closed In and flying was stopped because if lightning. The boys and some of the big boys played grid iron for the next hour or two as we waited for the weather to pass. Successive storms rained on us briefly and lightning struck several times very close forcing the Cd to abandon flying for the day at 5:30pm.