Monday was a beautiful day and we had a short Team Meeting at the hotel before heading to the field.

Daryl was first up in the third group and his flight was uneventful in nice conditions. His landing was good fir the 1000 points as he scored a 9:55 – 99
The read from Tom and Daryl was downwind to the right where Chris hooked up quickly and found himself on his own. The others in the group went forward and struggled a little. Chris easily made it out and recorded a 9:52 – 99. For a 996 score.
Conditions were showing a south wind of 4 to 5 mph with thermals cycling through on a regular basis.
Jody had his X2 really singing with great tension on launch and got off with the pack at about 2.5 secs but was high guy from the start. Turning left off tow he hooked up and flew an easy thermal to burn up the clock. He had do take avoiding action to go under another model 5 secs out on landing but managed to stay on track to score a 99 to match his 9:55 for a score of 998.
The 1st round of juniors saw Tristan launch first and decide to follow a read to the left and downwind. Although his read yielded lift it took him far from the pack and soon he found himself alone and struggling to buy his ride home.
Eventually at 6 minutes in he landed out on the northern end of the airport and relaunched his second model to at least post a score.
This was a disappointing start but Tristan will bounce back.
Dillons flight with his X2-3.8 was a little uncomfortable to start with as he followed the pack forward to the right. After a few minutes he hooked up beneath the others and soon was high guy. His landing though a little hot was excellent, recording a 99 to go with his 9:54 to take the 1000 points.
Dominic flew his 3.5 Xplorer and worked light air downwind with the pack. He came home a little early to rejoin others in a new thermal to make an excellent 9:53 and a 98 landing to score 998 points.
Though Tristan’s flight was a bummer the boys are in good spirits and it is a long contest.
At the completion of Round 1 Daryl was in the top 9 with his 1000 while Jody and Chris were just outside the top group a couple of points back. 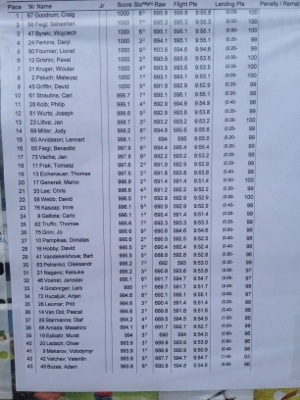 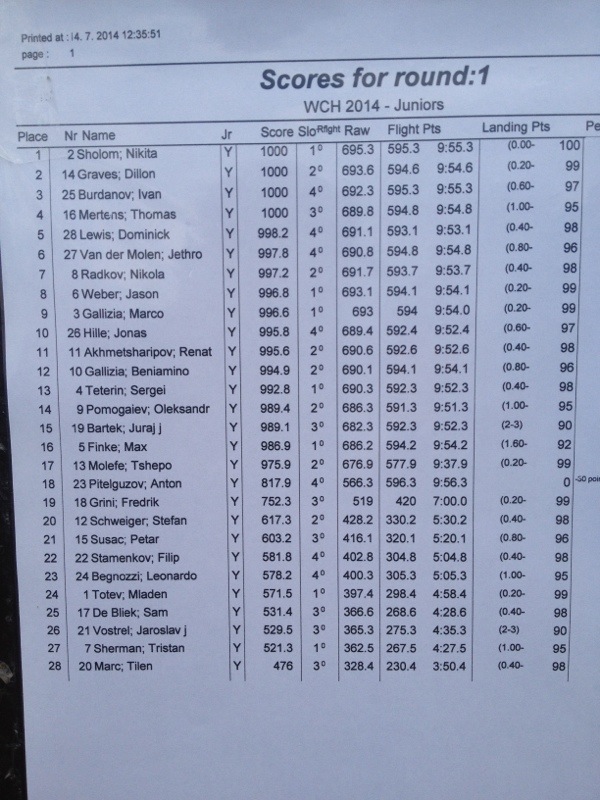 Round 2.
Jody was first up and with a little wind at 5 to 7 mph he added one brass to his 3.5 to give himself some options moving around. Hooking up in soft lift downwind with the group, he was uncomfortable at times and really wasn’t gaining sufficiently to make the trip home. At 5 minutes we saw a shift take the windsock left so he started moving forward to that side and eventually found air to complete the time His 99 landing complimented a great 9:56.
Daryl flew with 10oz on board in a prevailing of about 8 to 10mph. He took a good launch and went right with a group of 5 pilots and found good air to make it an easy task. His landing was unlucky as he mooshed through our watered down spot to finish the nose outside the 100 for a 99 to go with his 9:54 for a score of 998.
Chris was next and he chose his Aspire got a good launch and began with the pack toward the corn on the left side.
Only one model separated and he went forward to the right and just kept going up and out while the pack was struggling to find any useful air. Once they spotted the front guy a few minutes in, Chris and the others followed suit and followed his path benefiting from the same air. It looked like Chris might make his time but with 1.5 minutes to go he had to creep back over the tents to take a landing about a minute early for an 8:59. He was totally out of energy also and slid in for a 96 and a score of 921.
Dominic was our first junior up and he flew a magnificent round between two groups of pilots finally working decent lift downwind at 200 feet with 3 mins to go. He never really gained enough height to be comfortable to get home over the corn but at 1:30 to go he pointed for home and we held our breath as Dominic pushed the Xplorer down and got her moving. It was with a lot of relief that we saw his model rise up on the road home and favorable air made it an easy ride. We looked at Dominic and saw he was praying too as he was on his knees flying the model. He made it back for a 9:55 – 92 to score 992.
Tristan was next and he was never really in trouble checking out with the group downwind to max. His time was excellent with a 9:53 – 98 which yielded him 998 points.
Dillons flight was a doozy as he got off cleanly and meandered around initially in the center before choosing marked air to take his X2- 3.8 out. His landing was a little long downwind requiring the throttle peddle coming back at 10secs but he adjusted beautifully to finish inside the last second and hit the hunskie for a 9:54 – 100 and another grannie to match his first.


Round 3
Jody was up in group 3 and gradually during the preparation time the prevailing wind switched through due west to be 5 to 7 mph downwind by the time we launched. I loaded the model up to about 3/4 of my max pretension and let her rip on a 2 second kick, but as with most hand tows downwind, the launch was horrible. Lift was almost overhead so the entire group flopped around into it and easily made their times. Jody maximized the opportunity being last to land AND smacked the hunski as well giving him a well earned 1000. His time was 9:54 – 100.
As the day drew to a close the sun hid behind the storm clouds to the west and conditions became very calm and light. We still had two pilots left to fly Rd3 – Daryl and Chris.
Daryl got off first and finished highest off launch with his Uberlight X2 4.0. He floats to the East with the group and after 5 minutes the light air developed sufficiently for Daryl to become comfortable. He made a good landing to record a 9:54.9 – 98. We had been watering each landing spot we used and Daryl’s very long nosed 4.0 pushed through the mush.
Chris was our last pilot to fly and he took the big Maxa out of his bag to Maximize the very light air as the sun went down.
He started well and also followed the pack east without really making height. Gradually descending he finally flew further downwind to reach more buoyant air and circled very patiently to finally eek out the 10 mins. It was nice flying and he thoroughly deserved the 9:53 time he recorded. Chris’ landing was a little slider into a 96.
The final flight concluded for the day saw the scores for seniors posted for the conclusion of Round 3. It was a great reward to see Jody Miller -USA in position 1 with 2998.2. Current world champion Benedict Feigl is 2nd with 2997.7. Lennart Arvidsson od Sweden is :rd and we have Daryl poised in position 4 on 2997.3.
Chris is placed 56 because of the hit he took early in the day. It is a long contest so there is a lot of flying to do and Chris will come back.
Rd 3 of the juniors was not started but positions after 2 rounds are Dillon Graves – USA in 1st with 2000 points. Dominic Lewis in 8th with 1990 and Tristan Sherman 22 with 1519.
Nice to see us on top of both Leader boards! Go USA.
Juniors are first up in the morning. 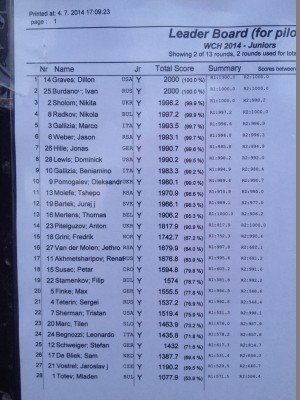 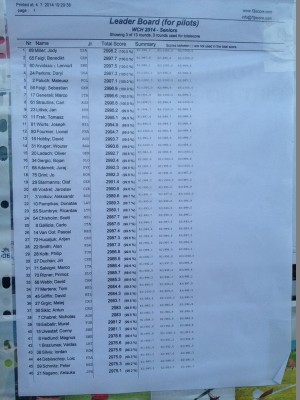 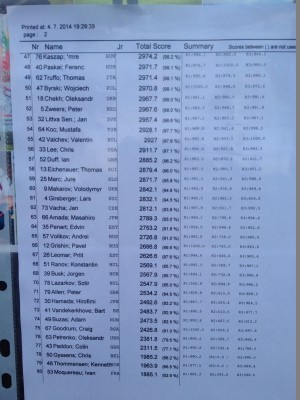