Hump Day at the worlds followed more overnight rain to make the field more muddier and the towing a little bit harder.

Cd Sotir tested the cloudbase with a quad copter and found it at 300 meters so the contest started a little after 9 with Rd 5 of the juniors.

Stoil flew first in much lighter wind and lighter air than we have had all week and shot an uneventful 9:50 – 97 landing.

Charleston followed flying DP’s old 3.8 (from the 2014 Slovakia worlds) and after a great launch flew the best we have seen him do yet to score a 9:46 with a 98 landing.

Luke also made a great Rd 5 flight in the gentle conditions to score a 9:50 with a 98. The wind has been about 5 mph and the lift fairly easy to read so far which is a far cry from the last two days 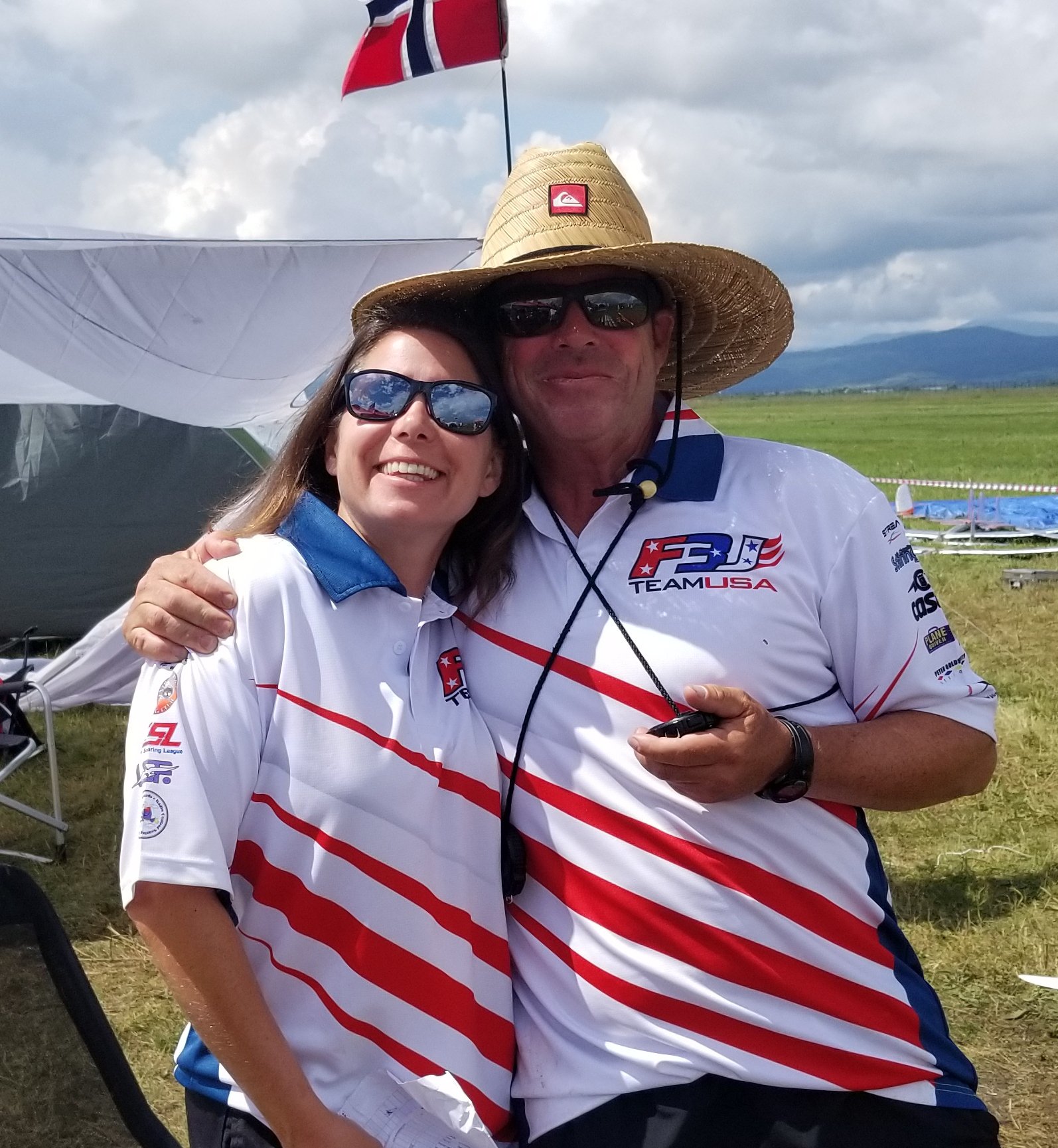 Charleston followed and again found nice air in two different locations to navigate his way upwards for the max. He left flap out a littke too long on landing which caused him to fall short at 4 meters but it was still a great scoring flight for USA. His time was also 9:44 and 85 for 965 points

Rd 7 for Seniors saw Jody fly first in grp 3 and we got a great read from the flippy birds feeding on bugs to take lift out over the factory for an easy flight. His time of 9:54.7 – 99 landing gave him the 1000 for the group.

Bob flew an impeccable round of solid F3J for the Team with a good launch and on-time landing at 9:53.6 and a 99. He was working lift deep but decided to stay safe and came forward to the gaggle to finish his flight. His score was 994.6

Neal got a solid throw from Kelly with a good 4 second tow and gradually drifted downwind in nice lift right off launch. It was probably Neals easist flight of the contest for a 9:54 – 99 for 997.1 points.

After 7 Rds Jody is still holding down 2nd place with Neal in 6th and Bob has moved up one place to 21st. The USA Team is holding down 3rd place on 20158 points.

The Juniors flew one more Rd before lunch and Stoil was first up but just before launch his elevator started hunting. They quickly switched models but a minute was lost getting the second model in the air. He flew his backup for a good thermal flight to make the most he could and finished with a 8:50.5 – 99 for 906.4 points

Luke was next and he flew nice air for half the flight butbhe really had to wkrk hard for the last 5 mins to make his time as he sesrched toward the hangar for happy air. his final result was an excellent 9:53.5 – 99 for 997.1 points

Charlestons flight was nicely done also with him really improving his turns. Josh has been helping with calling Charlestons air and he has settled down a lot to make some realky nice flights. He finished with a 9:46 – 92 for 973.7 points

CD Sotir has informed us that the no fly zone over the Helicopter manufacturing facility has been lifted. He had called a no fly zone downwind in a 1/8 quadrant as they were planning a Hover test.

Lunch break was held for 1 hour and then the Juniors went out for Rd8 with Stoil up first again. The wind has finally come up and is now blowing around 8mph so we all have added ballast as the èe An uneventful thermal flight ensued and Stoil hit the mark with his Green tipped Xplr 4m 9:52.6 – 99 for 998 piints.

Luke was next with the big red bird and loaded with 10oz of ballast. At 5 minutes in he looked to be in trouble back over the factory roof but continued to make some nice turns and caught his ride to make it back to the LZ Luke finished an wxcellent flight off with a 9:50.1 – 96 landing.

Charleston flew last and once again flying the ex DP 3.8 with 10oz ballast worked about 6 thermals to make his time and land straight in approach but once again he isnt used to the lighter midel with big brakes and left it 5m short.his score was 9:50.5 – and 80 for 968 points

That was the completion of 8 Rds for the juniors so with the drop applied we have Stoil in 4th place and luke in 8th Place with Charleston in 13th.

The junior team has also now advanced to second place with the drop applied. 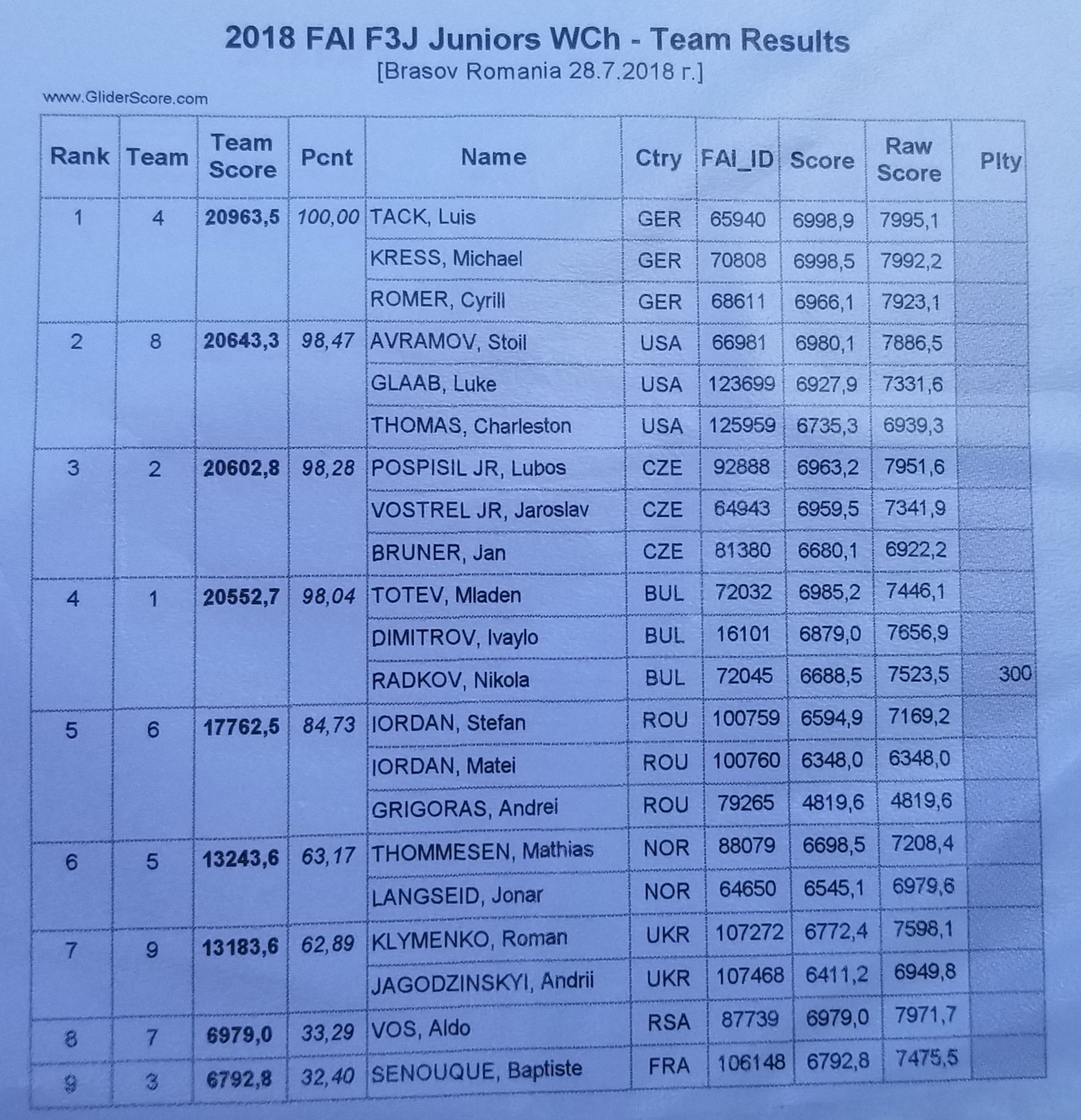 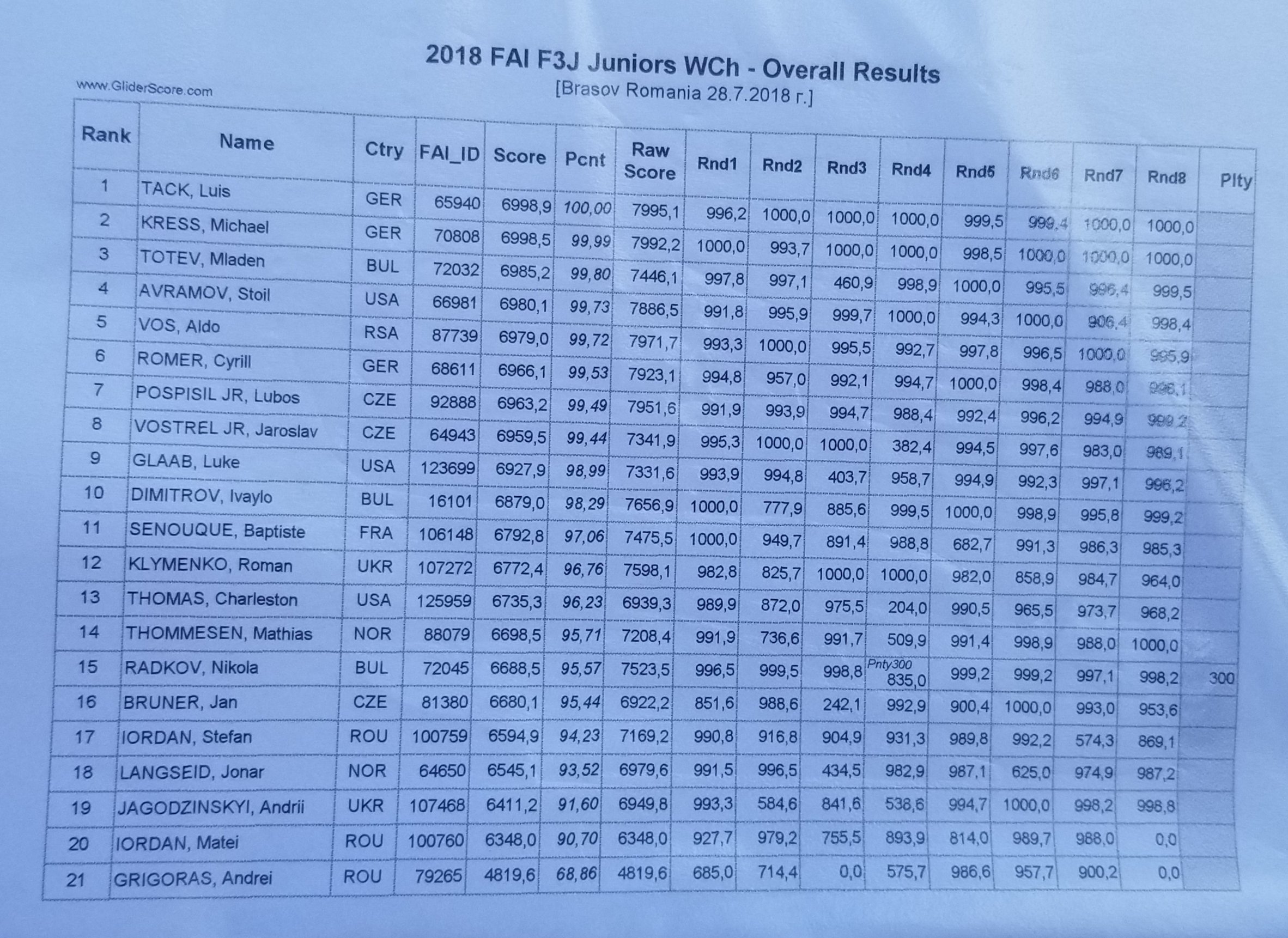 Neal flew off to the West with only one other model following and hence he had left the pack. We were quite worried for the first 3 or 4 minutes as he failed to hook up and had to rejoin behind them back to the east over the factory. Gradually Neals model started to rise and by 6 minutes in he was out of trouble and doing well. He had got into the bottom of their air and he made it work spectacularly. the final result was a 9:52.3 – 100 for a 999.5

That completed the 8th round and the Team is now in 3rd place. With the drop Jody is now in 5th with neal in 6th and Bob in 22nd.