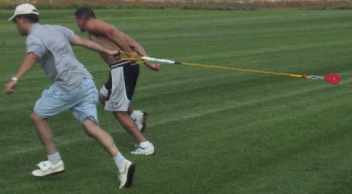 Two towers pull on a harness connected via a pulley to the mono.

The League of Silent flight is the US Special Interest Group that supports and encourages R/C soaring across the world through its Soaring Accomplishments Program and the organization of the Soaring Nationals in the United States. You can find more information about the LSF at http://www.silentflight.org.

In an effort to explain to a little about F3J to the masses that the LSF serves, Jim McCarthy former US F3J Team Manager offers the following explanation for your enjoyment….
What is F3J

Format: The original concept for F3J was developed in England. The idea behind the format was to eliminate the dependence on winches and retrievers and put the emphasis on pure thermal duration.

The idea was to use a standard length line (150M) and use fellow competitors to tow up your model. The format was man-on-man with 4-8 competitors in a typical flight group. The flight group working time was 10:00 with a penalty imposed for over flying the working time. Initially the landing task was de-emphasized to a 25-point in/out circle. Scores were normalized within the flight groups. 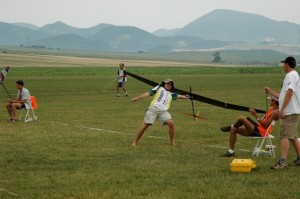 Joe Wurts stretches the tow line before he launches his model in an F3J contest.


In the early days of the event it was typical to watch fellow competitors launch and then “piggyback” on their air. Any flight time over 9 minutes was considered good and the models were typically very large and of built-up construction.

The emphasis was to keep the scores tight and make sure that you were in the final days fly-off. The fly-off consisted of the top 6-10 competitors flying against each other in two final rounds. All previous flight scores are dropped and only the two fly-off rounds determined the final outcome.

The event as we know it today still retains the spirit of the original rules. Launch lines are restricted to 150M and you can gain a very competitive launch from any two people on the field.

The landing task has been changed to the FAI graduated tape which is much more difficult than the original rules but still fairly lenient by U.S. standards. What has changed is the competitiveness of the event.

As with any type of competition competitors have taken this event and maximized the variables in order to gain a competitive advantage.

Launches now occur at the start of the working time and a good flight is considered to be in the 9:54+ range with a minimum of 98 landing points.

Molded models are the standard.

I believe the spirit of the event has stayed intact. It is still very common for people to tow, time, and assist fellow competitors, especially in the fly-off rounds. The emphasis remains on thermal duration and anyone with reasonable flying skills can participate and enjoy the event. F3J Team Selections In 1996 the FAI recognized F3J as an official FAI event and thus granted it World Championship status.

Recent changes to the FAI rules have allowed the use of F3B winches with 150M of line to a turnaround pulley. Wing loading of all models has been restricted also to standardize the flying weight of every model to a minimum wing loading of 20g/Dm2 The worksheet below (Thanks to the efforts of Daryl Perkins) details minimum flying weight of various popular F3J models in 2019