Another glorious day greeted us for breakfast as we prepared for Day 2.
The Juniors were first up with Dillon in lane 4. A 4 to 5 mph breeze made conditions cool and with the sun having risen around 5am there was ample active air to make time from a full tow.
Although we encouraged Dillon to taken no risk with his X2 – 4.0 he slowed twice on the landing approach to hit the circle less than .25 secs before the horn. It was a scary moment but the resultant time of 9:55.75 with the 99 yielded Dillons 3rd consecutive 1000.
Dominic was next to fly with his Xplorer. 2 models crossed on launch in the adjacent lane and Dominic had to duck as a tail-less model crashed down a few feet away. Dominic’s complete group congregated on a thermalling hawk and everyone used the soft thermal to get their time. Dominic’s time was 9:50.6 with a 98.
Tristan’s launch was a very scary moment as the model snapped 1 second in and with the X2 plummeting vertically to the ground Tristan pulled out and finished at about 150 feet running downwind. Once he settled down Daryl coached him into a piece of air and he was soon joined by a few other juniors as he climbed out. The mistake on launch assured Tristan of a great time if he was good on the back end with the landing.
Unfortunately he was slightly low and slow when he reached the landing zone and his model skidded through and hit his shins for a zero landing. He made a good time though with a 9:54. This being Tristans second low score we really are pulling for him to put in some great flights.


Round 4
Jody was up first in improving air and chose to fly the 3.5 X2. He got off with the group and flew far left and forward probing for air. While he was out front others started to hook up to the right so Daryl called him back to he marked air and Jody worked it for his time.
In the LZ he turned a little tight and became early on his approach. The result was a landing two seconds before the horn for a 9:54.5 – 99 scoring him 996.9 for the round.
After a great throw by Jody, Daryl got off the line first by almost a full second and had an uneventful trip downwind with the group to return and execute an equisite landing to just beat the buzzer for a great hunksi. The time was 9:56.69 and 1000 points again.
Chris got his Maxa out of the bag and got a good launch to take big air out for a fairly easy max. The air was ripping which took Chris a long way downwind.
He made it back for a great landing, scoring a 9:54.1 – 99
Dominic was next and he made a safe launch and in great thermal conditions specked out in a few minutes before cruising back for his landing. He was a little late on the approach and had to set down short of the hunksie as a result. He scored a good 9:55 – 95.
Tristan launched with his group and was getting out downwind in a boomer before 5 minutes in the Cd called them all down because of an approaching thunderstorm with lightning and strong winds. Lunch was had before we resumed with a relaunch of Tristan’s group.
Tristan got away with a great launch and went left with the pack and never really did find the air. He gradually came down and finished up under the bubble if lift and though he searched he couldn’t make it work. Finally working some air low for a few minutes a long way down wind he had to come home but finished short of the landing area at 88m away to take a zero. Though Tristan is upset he really is a way better pilot than that and he will bounce back.
Dillons group all stayed on tow a little long except for our adjacent lane where the pilot popped off causing Dillon to react and get off too, so we started with a second in hand on the rest and simply took turns overhead in the thermal that was sitting over us. After 5 minutes the air for soft so we moved crosswind 200 yards to marked air on the west side and Dillon easily completed the time. Unfortunately taking evading action to avoid two other aircraft on his approach resulted in him being a couple of secs early for a 9:54.7 – 98. His score was a 997 but he remained in 1st place in the contest.
That was the end of round 4. 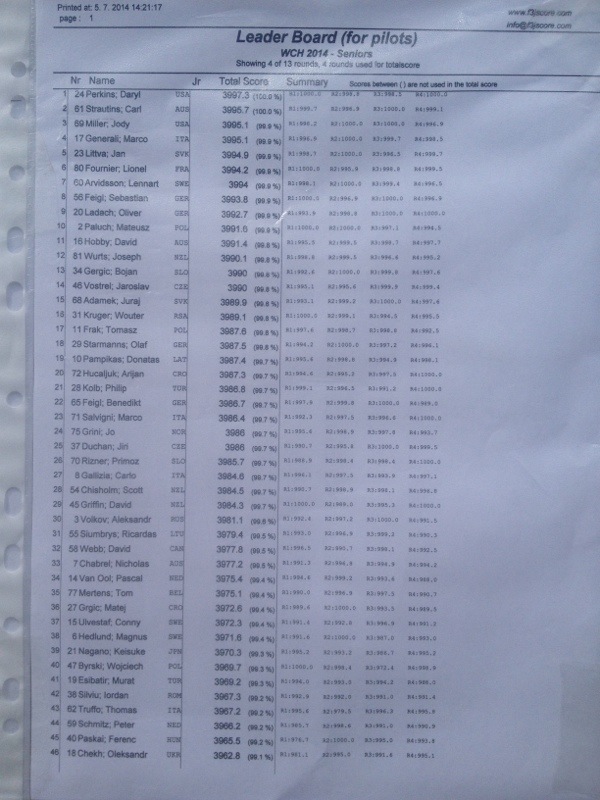 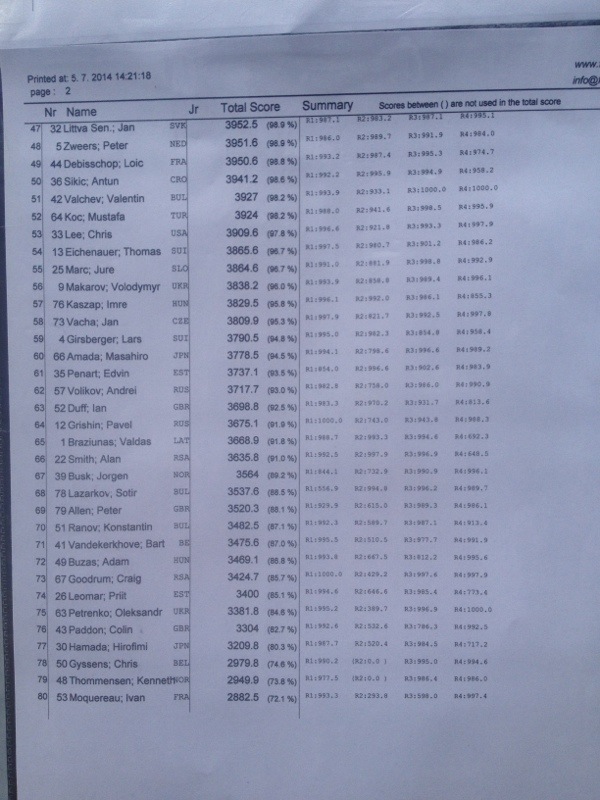 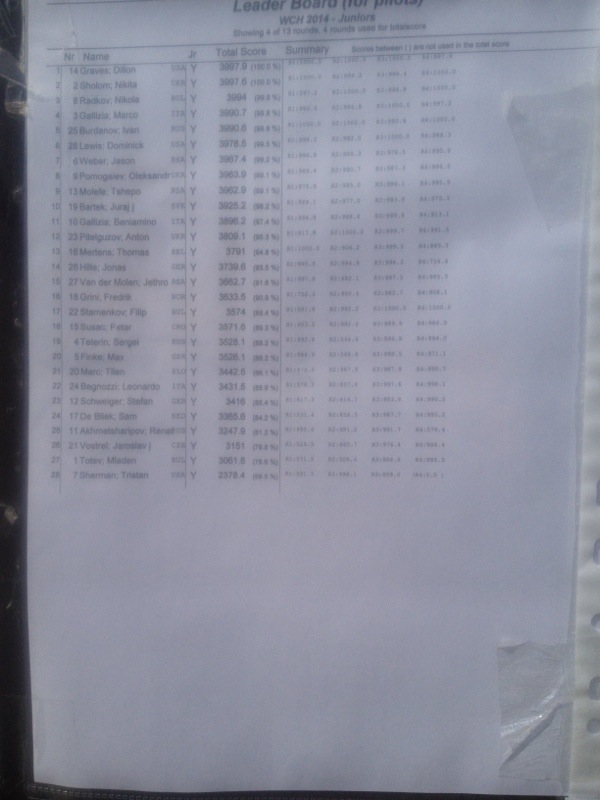 Round 5
Chris flew his Maxa again and with an early off on launch he was in great shape to make a good time. Daryl took him far out to the west to engage some good air and even though he had to go further than what he was comfortable with the air was good and Chris flew a beautiful flight to finally return and nail the 99 for a 9:55.8 time and the 1000 points. This was a great result for the Team as it hurt a few pilots in his group who were near the top.
Jody took a good tow and his group split upwind with 1 guy short towing and running downwind. Jody hung in the center while we watched the two sides and initially a pilot started to work a bump deep to the left. As soon as we saw it was working Jody broke left and hooked up deep in the western sky. It was a long haul in fairly week air and we weren’t comfortable until 3 mins to go. Only 3 other pilots maxed as the air in close was pounding. Jody floated in with just sufficient height to make it back and was very slow in the LZ. He was nearly late but made a great correction to finally finishes with a 9:55.4 and a 99 for a score of 995.4. The pilot who got off early was the winner with a 9:57 -100 hence Jody’s big hit.
Daryl went next and had no trouble in making time from a decent tow but in the LZ he slowed the big 4.0 a little too much and slid in for a 96. His flight time was 9:54.9 which scored a 995.9.
At the end if Round 5 for seniors Lennart Arvidsson of Sweden had moved into 1st on 4994 with Sebastian Feigl in 2nd on 4993.8 and Daryl 3rd on 4993.2.
Jody dropped slightly to 7th in the tight grouping at the top. The top 12 pilots are just 15 points apart.
Tristan was up first for the juniors and he took a thermal deep downwind to return safely to make a great 99 landing on the 1 second. His time of 9:54 gave him a score of 998.8 for the round.
Dillon also had an uneventful round in great air with his 4.0 X2 and absolutely nailed the landing for a 9:53.7 – 100 and the 1000. A lot of pilots got spanked in his group which helped our team as a whole.
Dominic was last to fly and he up in an epic flight in tough air downwind where he was 1/4 mile away and low trying to make it back with a few others. Remarkably the air got better and better coming back and he crawled around downwind of the buildings until the clock wound down finally making it to hit a 98 and take the 1000 with a 9:54.4. It was an amazing effort and we applauded him heartily.
Dominic’s fine piloting put him up into 3rd position after 5 rounds on 4978 points. 2nd place is Nikola Radkov on 4984 and Dillon is clearly in the lead on 4997.9.
Tristan’s zero has him languishing in last place but the drop will help and we have 2 more days of flying yet in tough conditions at times. 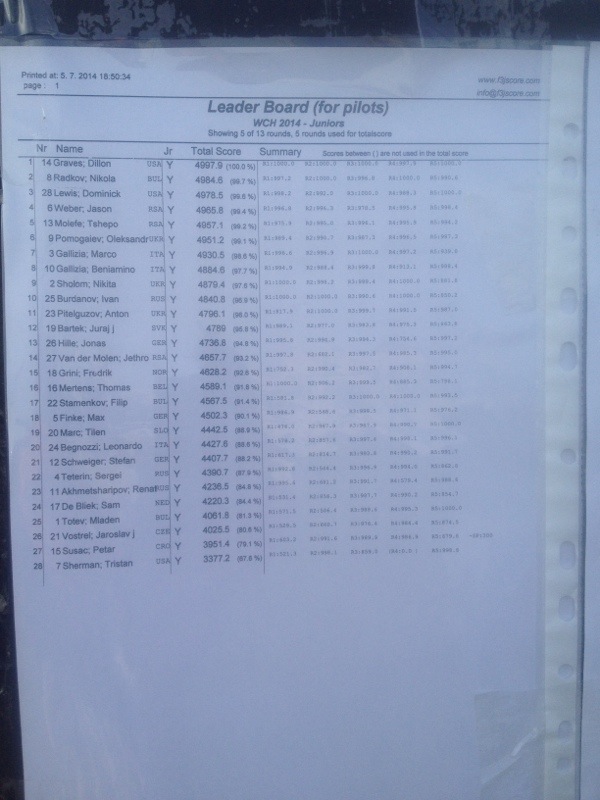