Weather for today looks like more glorious sunny thermal-friendly air with barely any wind to speak of. 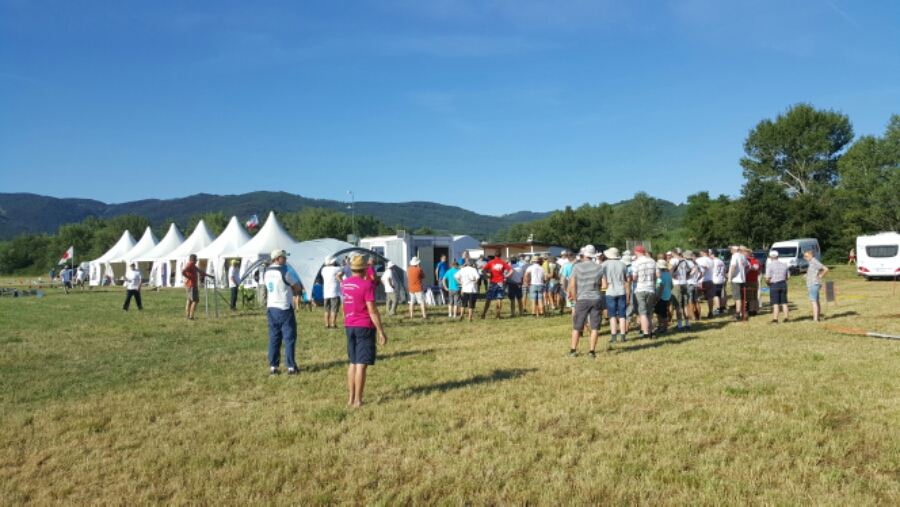 Gordon was first up in Round 1 – Group 1  and took a full launch to find air quickly after an  easy read. His landing was a little early but still made a respectable 9:55 – 97 and 997 points. 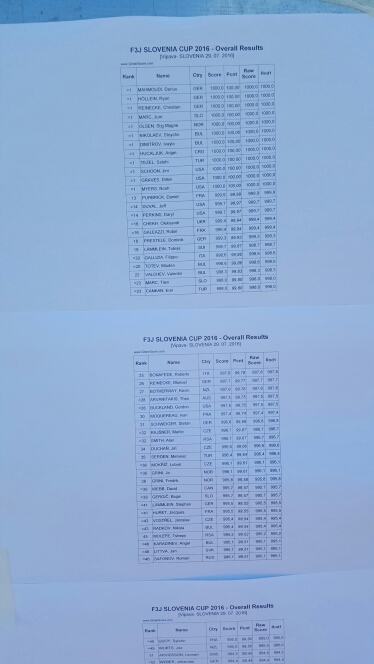 Jeff was next in Rd1 and took a fast tow in a downwind condition but stayed on a little too long to get the lowest launch of the group but also having got off first was in good shape for a score.

Daryl took a usual 2.5 to 3 second tow and went straight to his thermal to check out quickly. Others soon joined him in the good air as DP cruised around trying to entice the gaggle away from he good stuff. It was really the perfect DP flight with no dramas to.speak of. Daryl was last to land with a great finish and scored 55.97-100 for 999.7

We thought it a little weird that both Jeff and Daryl were not beaten to get off and both were last to land but neither scored the 1000????

Stoil was next pilot up and had a little trouble on launch cutting across to the right half way up and getting off early without a zoom for a fairly low launch.

Stoil worked hard in air just inside the treeline for a few minutes  and then tried to reach the air we felt from the draw.but was too low and finally succumbed at 4:30 in so took a relaunch to finish with 5:32.2 – 95. Stoil is flying very well so we are glad we got this one out of the way early.

Dillon’s Rd one flight was a short tow and a short ride upwind to find light air and worked it out toward the mountain for 8 minutes. He made it back and landed in swirling air to finish downwind and a second earlier than planned. The downwind flipped his model and creased both ends of his center section. The landing ended up being a 99 with a 9:56 and the 1000 points for the group.

Noah’s first flight was a gem as he took a reasonable tow and went forward to the read but didn’t hook up. He returned along the treeline past the scoring tent, around the flag pole and acquired marginal air just past the tents at 20 feet. Noah did an amazing job to core the thermal and dig himself out to finish with  a 9:55-99 and a 1000.

Jeff was first off in Rd2. He once again decided to take a short speed tow and executed this one a little better. He hunted to the west past the treeline where the draw indicated and though he found the air it was a 4 minute struggle drifting away to the west before he finally found the developing air further South and we all relaxed as he completed the flight and executed a great landing for a 9:57. 8 -99

Noah’s second round flight was rather testing as he joined under a group of models to the south east up the valley and started working his way out. The air was their and he was joined by JW who had taken a super short tow and was struggling. Noah tried hard for 3 or 4 mins before breaking downwind and hook up low t 40  feet. Once again he had a piece that for minute but never did gain height as he got further and further away.  Finally e put it down and we relaunched for an easy 5:27-99.

Lunch was served and the Slovenian food was Leak and Potato soup, knoepfe and Rice.

DP in Rd 2 saw everybody drilling to the right so he went exactly in the opposite direction down the valley searching until he found air. It was tricky stuff though because not only is it nearly impossible to see your model against the granite mountain background but the lift often yielded results for two wraps then died away. In the end DP got out and returned to the zone for a 9:55.80-98.

Gordon was next up in Rd 2 and took a 3 second tow and turned left from the tow to an easy read and checked out. His landing was much better timed and he hit the 100 for 9:54 -100.

The next up was Jim Schoon and he took a short tow and rn downwind along the tree line to hook up perilously close to being too low behind the trees. He gingerly took turns  and each turn seemed to yield another 13 inches of altitude as His model clawed its way above the trees. It seemed like an eternity but once he got out to 100 feet or so the lift started working and he was finally out of trouble. It was great flying and he set I down in the LZ for a 9:56 -98.

Stoil made a great launch in Rd 2 and led the pack to a great piece of lift out over the mountain. After his eventful first round it was sort of  an anticlimax as he finished miles high and returned to hit a fabulous  9:54.3 -99

Last up in Rd 2 was Dillon. The line direction was changed between Stoil and Dillon’s flight and the Towers struggled for time to get the direction changed as they didn’t hear the call.  We only just got hooked up in time with 10 seconds to go but then the Towers didnt identify Jeff who was signalling and our hand pumps didn’t give tension. Gordon was throwing and he called for a kick at 4 seconds because we still didn’t have any tension. it was only when the other teams started running g that our guys went and Gordon didn’t throw four a f second after the shooter waiting for tension. The resulting launch wasn’t pretty or high but Dillon has taken a million bungee launches lower and he went with his gut to hoo up get out and get back for a landing right on the horn scoring a 9:56-100 to once again take the 1000.

The scores after 2 Rounds see the USTeam in a very strong position with Dillon equal 1st with 2 2000 points. Jeff in equal 3rd place just .3 of a point behind. DP in 9, Jim in 17th, Gordon 22nd. Stoil and Noah courtesy of r elaunches were in the 90’s 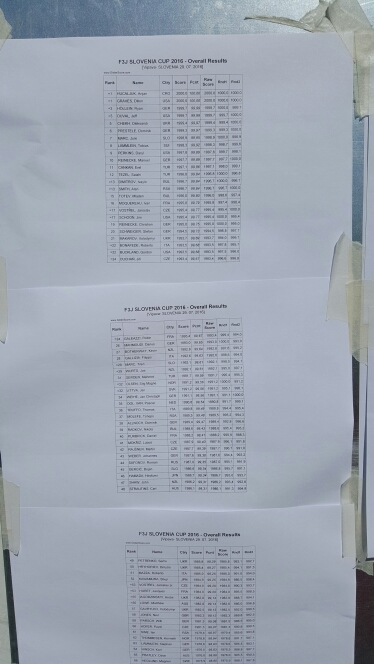 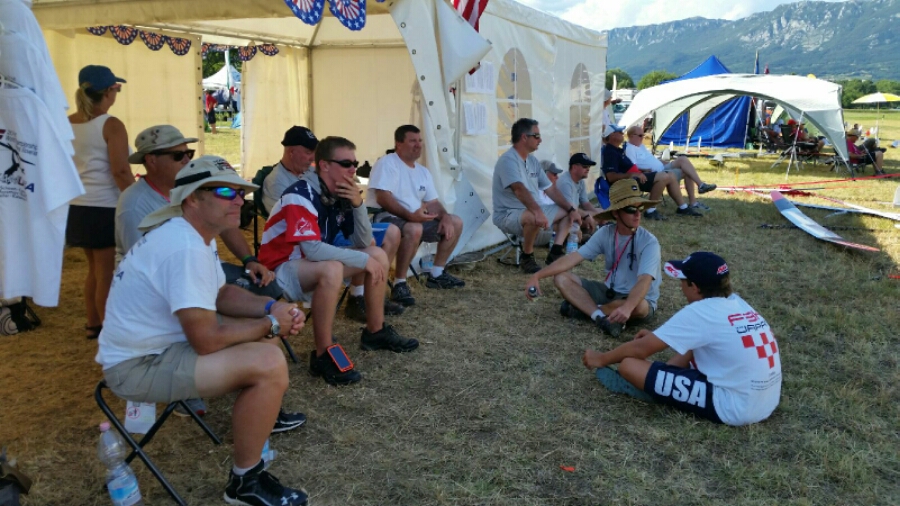 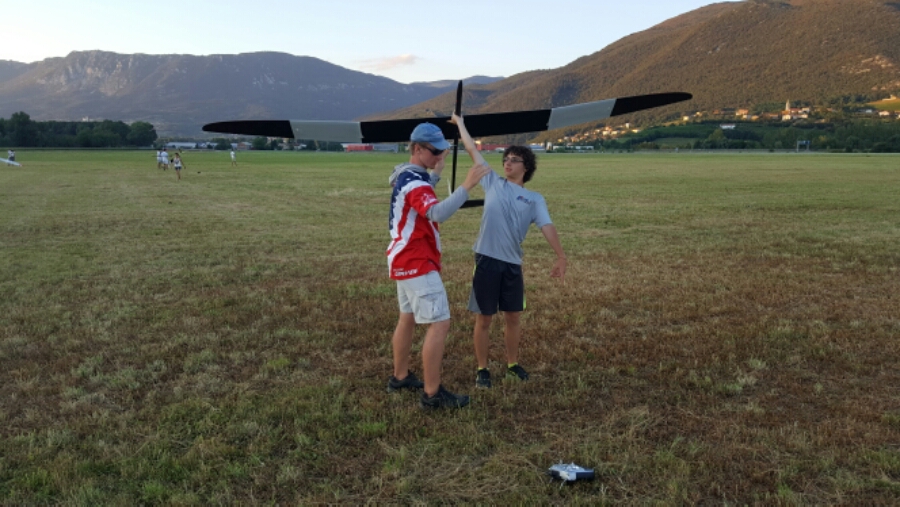 Gordon was up first in Rd3 and with a solid tow turned downwind to lift just over the safety. Corridor. An easy 10 minutes later he returned to make a good 99 to match the 9:54.6 time.

DP had a real weird read with the flags going in all directions. But Daryl did as Daryl does and sniffed it out to make his time. His landing was a little hairy as he landed in strong lift and  the model kept coming and coming to leave a few seconds on the table. His time was 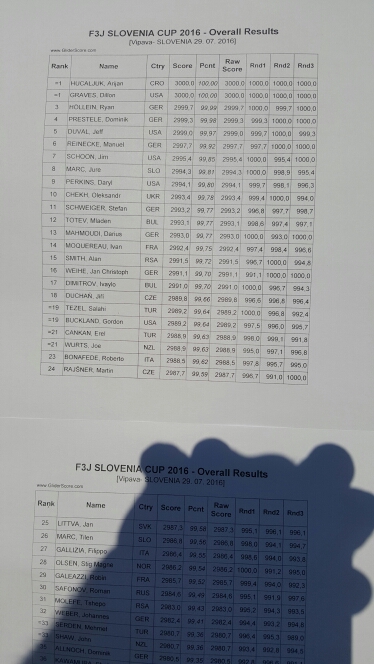 The real story of the day is the tussle at the top with Arjun and Dillon sitting on 3000 points each not giving an inch.