Friday dawned 90% overcast with a mixture if high cirrus and some lower stratus cloud obscuring any sun from doing its work. The breeze remained like yesterday from the east at about 5 to 7 mph.
Chris was in the first group to fly of Rd 10 and he flew the Aspire empty at 73oz he hung with the pack behind the tree line with JW at the back of the pack sniffing the pops ahead. Chris flew beautifully and found a small patch to take downwind a little way near the end of the flight and made it back for a 9:52.44 and a 98 landing.
That completed what was a heart breaking round for the senior team with both Jody and Daryl taking big hits in Rd10 in the wind yesterday to end their finals chances.
The juniors started with Tristan in the first group. We really need a strong performance from Tristan both for the Team score and to help Dominic get into the finals.
With the wind about 5 to 7 we took a direct tow with Chris (as did most of the field) it produced a great launch.
Tristan out launched the entire group with his direct tow and floated for half the task before finally taking the tiniest of bumps and turning flat he began to take his 3.8X2 out. With another junior in the same thermal they were able to key off each other to core this tiny piece of air and make it work they did as Tristan made his time and hit a slider on landing to score 996.9 with a 9:55.2 and 97.
Dillon was next and we also went with the Jap 70 line and a speed tow. Something went wrong with my throw as his 4.0m X2 went like a javelin toward the towers and overran the hook. It was almost as if I had thrown his model too flat as it just never hooked up.
Almost immediately we made the decision to launch the other model and Dillon landed the 4.0 while I grabbed the 3.8. We were in the air with less than 1 minute used up and set about making a good time. It was clear that the others were not getting out so we lined up behind them forward to the left behind the tree line and picked the best air. Finally as they all descended and either relaunched or landed early we worked a very light patch downwind as long as we could before Dillon brought the model home to land at 6:19.3 with a 99
Dominic was in the 4th and last group and he also took a direct tow, with his 67oz X1 and stayed with the gaggle for the duration of the flight. He piloted beautifully with a lot of patience and lasted to the end but finally couldn’t make it back to spot and took a zero landing. His time of 7:17.4 gave him a score of 785 which didn’t change his standing and he remained in 12th place just 10 points behind the 10th placed junior. Dillon slid one spot to 2nd and Tristan continued to improve his position and consolidate the position of the Team staying in the 3rd place on the Team Standings. 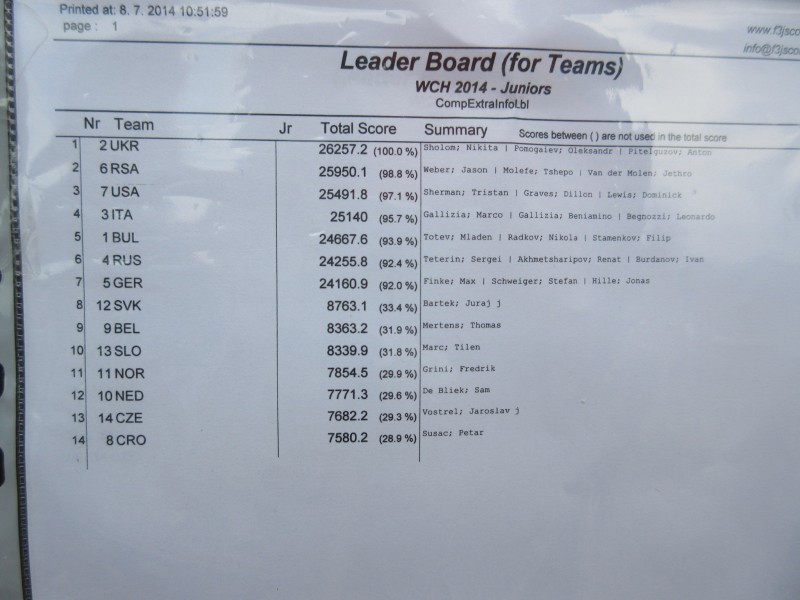 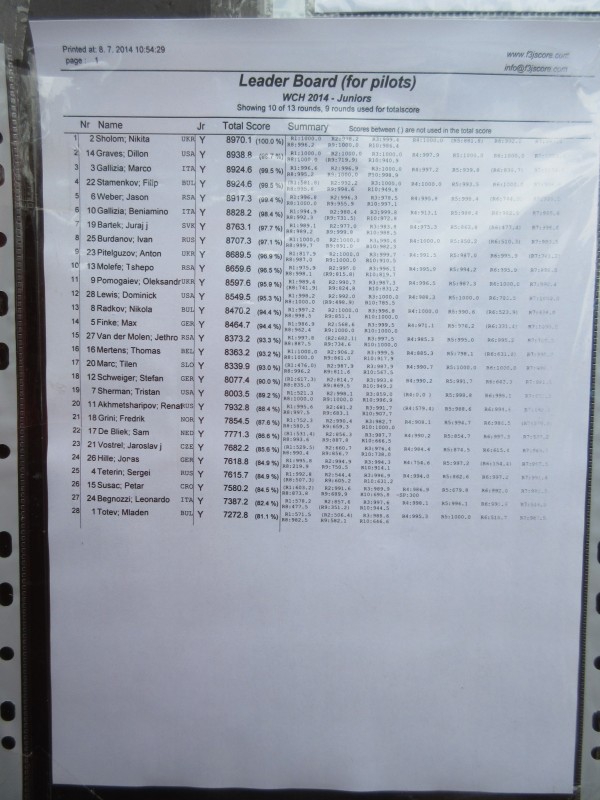 Round 11
Chris was first up in rd11 in slot 3 and
he worked a great thermal downwind just making enough height to get home but with a couple of minutes to go he probably took a couple if turns too many and didn’t quite reach the LZ in time. His resultant measure produced a 30 landing score with a 9:54.9 and 904 points. Unfortunately this would not be enough for Chris to make the fly offs.

Jody took his 3.5X2 with one brass on board at 62oz and we took a great direct tow on 1.5 megaline ro be highest even though we got off early. Jody faded left to stay behind the pack and we slid right and left to stay in line with the good air marked by the models ahead and eventually got a bump to take a ride downwind very deep with another pilot. Jody made a straight in approach and banged the spot for a 99 just before the horn for a great time. He was awarded the 1000 with a 9:55 -99 and it was a nice way to complete his campaign.
Daryl worked hard in 4 different thermals to make the time and did a fantastic job in the LZ to hit a 99 and score the 1000 with a 9:54.4.

That would be the final round for the seniors and the Flyoff spots were now decided.

Conditions were constantly improving with the sun now out but a good 7 to 10 mph from the noreast gusting with thermal draw to 14 at times.

Dominic was first up in Rd 11 for the juniors. He went crosswind initially without finding air and the searched upwind until finally hooking up a big thermal to make it up and out from a scary position. His time of 9:55.2 and the perfect 100 he hit made the 1000 points and surely got him into the Flyoff in an heroic effort. We have never been more proud of a clutch performance than this. Go Dominic!

Tristan probably launched too light as he took air downwind and tried valiantly to will his model home but it wasn’t to be as he landed over 100metres out for a zero.

Dillon decided to bring Joe out to throw and guide us into lift on the last flight and we got a super launch before Joe took Dillon to the right while the pack went left. He saw the windsock vextoring and told Dillon to continue way upwind due North with absolute certainty. He continued to encourage Dillon to be patient and although a couple of the pilots were turning in a reasonable piece of air behind our model Joe said keep going. 2 minutes in we struck pay dirt as Dillon tasted some up air and in a few seconds he had a boomer taking him out high above the other pilots trying to get back forward to our air. Dillon rode the thermal for 6 minutes came home and nailed the landing for 100 and a final 1000 to complete the preliminaries and make the Flyoff.

The final result showed Nikita Sholom of UKR in 1st and Dillon in 2nd and hoorah hoorah a Dominic with his magnificent 1000 in the final round moved into 9th to make thE Flyoff.

The flyoffs began with two rounds of juniors with Dominic in lane 9 with Frankie and Tom calling air. Towers were Paul Sherman and Phil. Dillon was in lane 2 with David Kalamen and David Pratley from the NZ team. Joe was a available to call again in the first round so he came out and threw for Dillon as well. Joe whispered to Dillon to take a 1 second tow and we got a great launch and Joe called Dillon to run downwind and then across to the left as all but one in the gaggle went to the left upwind. We found a little but if a bump and started some turns but it wasn’t working real well and a few of Joes instructions were not understood by Dillon causing a delay in getting the plane in position or as on a few occasions a turn in the opposite direction altogether. Dillon went back right out behind the Camping area and though Joe tried desperately to get him into some air he eventually put the model down a long way behind the hangar.
We relaunched his second model with nearly a full tow and searched forward to the left and Joe helped him find a soft patch which he needed to work patiently. As he moved back to the area of the hangar we felt a wind shift and Joe had him re position on a fresh piece of air which worked a lot better and Dillon started getting out downwind . The thermal was a good one but the ride home not so good and even with Joes coaching to get him home through the best air he failed to reach the LZ landing out at one meter too far (76) with the second model for a zero.
The second flight was much better with Dillon taking a three second tow and getting off with great altitude to fade left behind the pack. As we went, the air felt great and Dillon started turning in lift. He really made good in the air and for 10 minutes worked his way very huh and very deep. On the five minute ride home Dillon tried to stay out of the sink but it was a long way against a fair breeze and finally his model landed 30 seconds early but out if the LZ. The Cd measured it at 74 meters and Dillon was finally on the board with a flight score. His 14:27 gave him 871 points .

Dominic went downwind and made a great job of climbing out three times in three thermals before nailing the hunskie for 100. He scored a 14:52 – 100 for 996.7.His second flight he scored a 98 landing about a minute and a half early. His time was 12:24.5 for a 906.3
The outstanding junior pilot in the 1st two rounds was Max Finke of Germany as he made two 14:55’s and great landings for consecutive 1000’s.

The seniors were next for two rounds and they also found the air difficult to make 15 minutes with some pilots landing early. I was helping find Dillons model that landed out so I was unable to actually watch the two senior rounds.

The 3rd junior round was next with Dillon taking a full launch in very light conditions and moving out deep to the North with his 4.0. For 10 minutes the strategy worked as we slowly tried different air and stayed headed in to the wind. Max Fink took his very light Xplorer V tail downwind behind us for a few wraps and then continued to climb on his way forward as we descended and had to come home for an early landing. Dillons time was 11:02 for a score of 767 as Marco Gallizia and Max maxed and crushed the group.

The final round for the day was the seniors 3rd and right from the start it seemed that Joes model was higher as they all took full tows. It was late evening at 6:30 and the wind was still a steady 10 to 12 northeasterley.
Joe hung in the middle of the pack and barely moved forward of back but continued to pick up better air than the others and by the 8 minute mark was clearly going to inflict damage. At around 10 minutes in Joe took his first turn and started toward the LZ as half of his opponents had landed. Once the last model was down Joe positioned his Maxa for a good approach and hung for an extra minute to finally take the 1000 with a 12:18.7 and a 97.
As the six round finals format will include a drop it is unfortunate that such a classy performance will likely not receive its just reward as the other top pilots Like Jan Littva and Wojciech Byrski will lose this bad score.