The weather forecasts a week ago declared a lot of rain this week but in the end we have only had beautiful weather with some summer storms cooling things down each afternoon. Today was more of the same.
Rd 8 began with seniors and Daryl was up in group 3.
Daryl got off to a 3 to 3 sec launch in fairly soft but definitely active conditions to run downwind and hook up for a run of the mill max. Someone did get off early so it was going to be hard to take the 1000 in this one. What made this flight stand apart was the precision of his landing as the big 4.0 X2 rolled in on final with half flap and never looked like missing. He landed just under a second early and smacked the hundred for a 9:55.44 – 100 for a 998.8 It was Joe who launched first and made the 1000.
Jody got a great launch and went left through some good air, so turned downwind to taste the piece and started wrapping. A couple of models joined him for a few minutes and he was looking good but the guys upwind of Jody were also hooking up and he decided to come forward to their piece. Jody never did find their air as he tried in vain to keep his model up. Eventually he returned to the field landed out at 7 minutes and we relaunched for a 2 minute score.
Chris faded left while three others in his group hooked up downwind and started getting out. Daryl pointed them out to Chris and he hightailed it downwind to join them low with his empty 4.0 Maxa hooking up immediately to speck out. in return o the Lz he was quite late at15 secs and but pushed to the spot, slowed beautifully and poke its long nose into the 100 in the last second. His score of 9:54.9 – 100 took the 1000 for the round.
With Rd 8 complete for the seniors the drop kicked in and the leader board was reshuffled to reveal in 1st place Lennart on 6996.3, Daryl in 2nd on 6996.1 and Joe in 3rd on 6994.1. Jody slipped to 12th on 6984.8 and Chris moved up to 24th on 6978.2.
Clearly we need to keep Jody in the 998 plus range for the remainder of the prelims and Chris needs more 1000’s like the magnificent one he already flew this am. The best part was when the Team score was posted and USA had moved clearly into 1st place on 20959, with NZL in 2nd on 20946 and CZE 3rd on 20941. 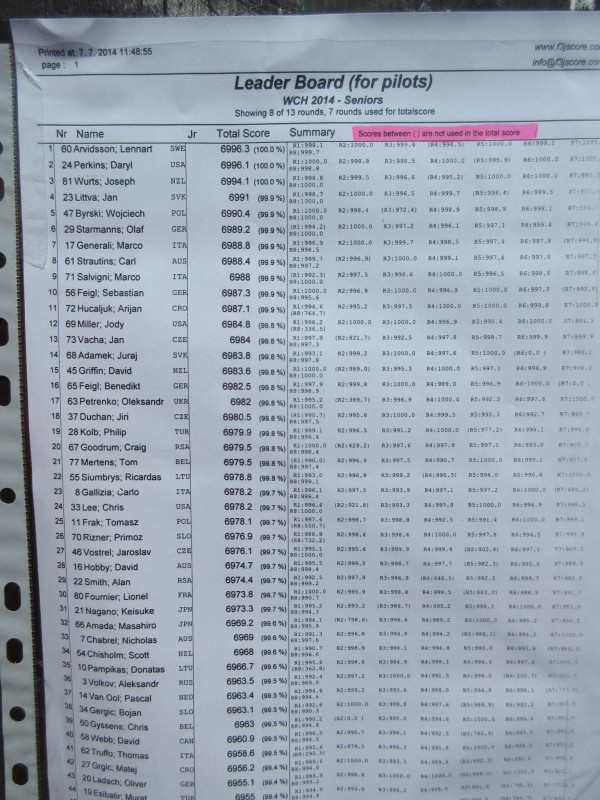 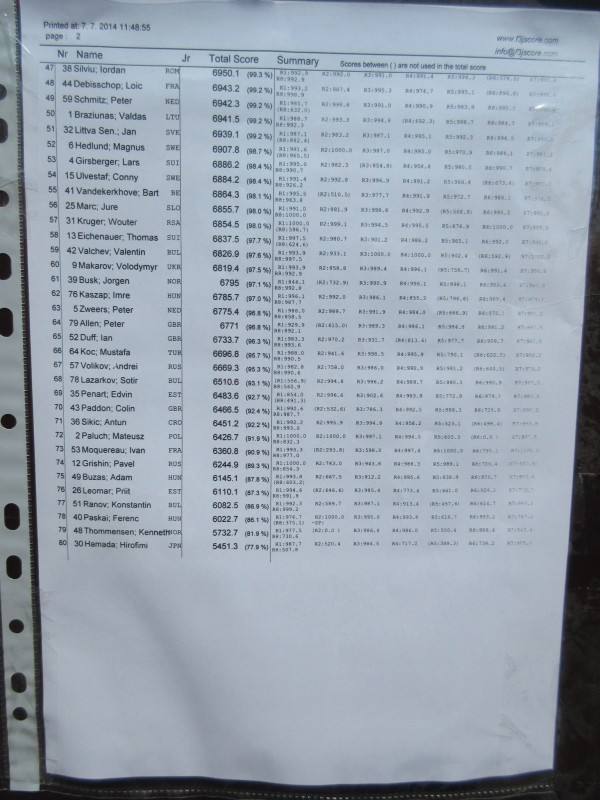 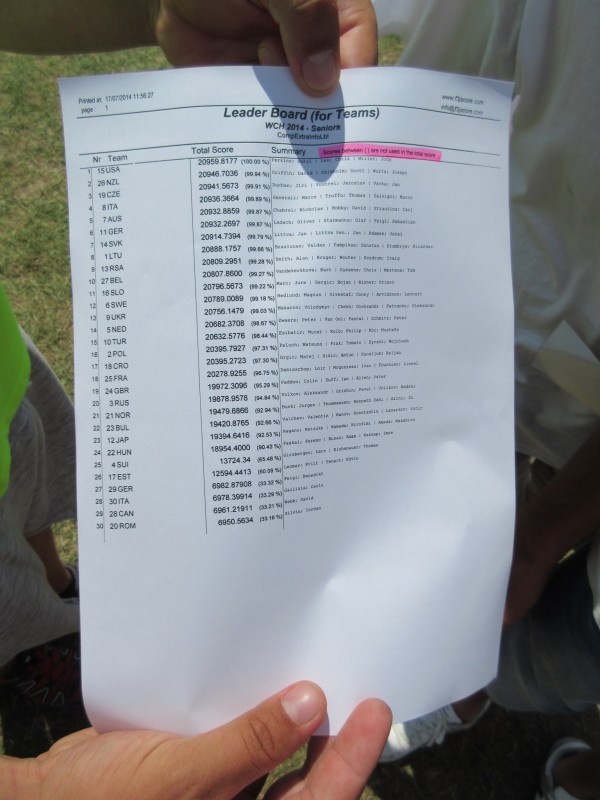 Dominic was first junior up in Rd8 and he had a line break just before he pushed for the zoom to take a really low launch at about 200ft. He followed the group to the left for a minute and a half and finally hooked up near GE tree line with a little bump. He flew his xplorer like a real pro as he circled patiently waiting for the lift to build. And build it did as the X1 started to rise up and three minutes in he was coring the thermal as it went away downwind over the town. He made it home and setup for a fabulous 99 landing. His time of 9:55.4 gave him the 1000 for the round.
Tristan flew a little light and struggled at first trying to work air over the control tower area. He was In the right place but doing very right turns and not climbing much as he drifted fast downwind in the 12mph that had set up from the east. He was a very long way out before his model finally started to respond and he began buying the ride back. It was always going to be a hard job to get back with little ballast so height was essential. He was fortunate he avoided the big sink on the way and made it back for a straight in approach to hit 98 with a clock of 9:52.6. It was only Tristan and One other pilot in the same thermal who made the time and Tristan beat him for the 1000. What a fabulous flight it was. One to remember forever.
Dillon flew his heavy X2 at 72oz and he hooked up quickly to he left and specked out deeper and higher than he has been in the contest. His landing approach was early so he popped and held for a second to make the LZ with a second in and and once again drilled the hunksi to take the 1000 points. With all three juniors taking the grannies to finish Rd 8 and the drop applied we now moved ahead of Italy in the Junior Team standings to be in third place for possible podium finish. I am so proud of these junior as they are flying their pants off and doing USA proud. 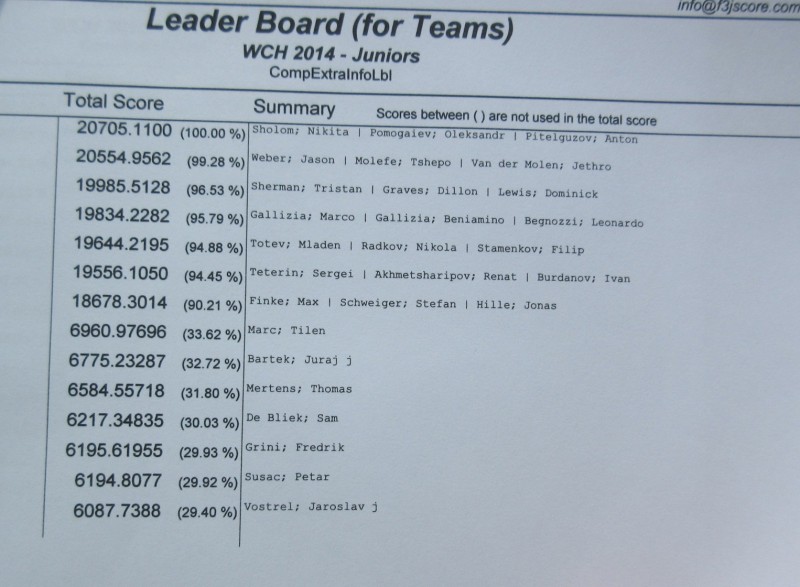 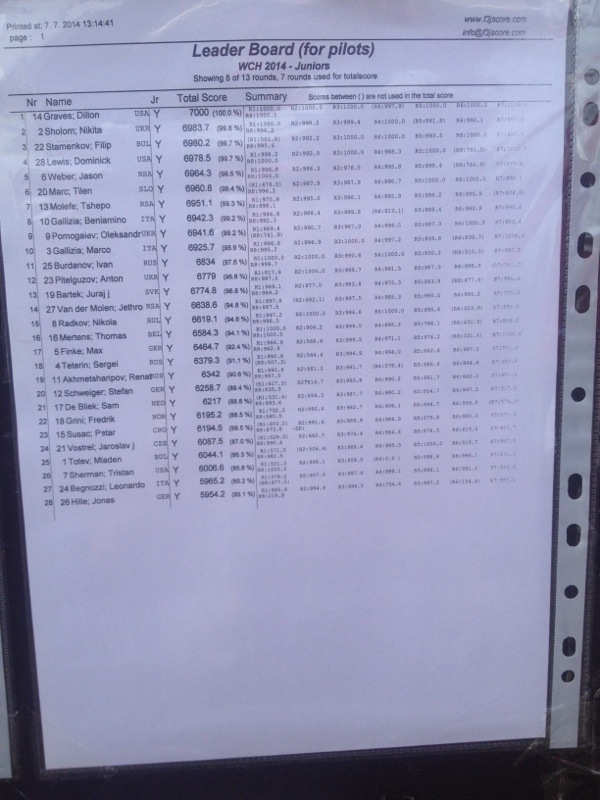 Rd 9 began after lunch with Daryl up first. The air for the groups prior had really been tough with the sun obscured by a band of high cloud and a 12 to 15 mph easterly blowing every thermal downwind fast.
Daryl picked up the wrong model to launch and got in the air way too light. As a result he couldn’t get to the lift and eventually succumbed to launch his second model for a score.
His time of 3:33.4 and 99 gave him is new drop of 452 points. Only one pilot in Jiri Duchen in his group got the max with the remainder landing early.
Jody’s following flight wasn’t any better as he ballasted the 4.0 to 83oz for the wind and launched in a group with Joe Wurts and Arayan. Joe was obviously lighter than us and he stayed faced upwind and floated gradually back avoiding the bad air and using the good while the remainder if the pack took a thermal downwind only just making sufficient height for a couple to make it back. Jodys air was not working and at just under 5 mins he came back and relaunched to finally finish with 4:51.2 – 98.
Chris was next and he ended the carnage with a reflight as a result of a midair with Craig Goodrum. In the reflight group Chris took air downwind with Craig while the two lottery pilots couldn’t make it work. As they worked the thermal together it became a race home for a landing shootout and Craigs 99 pipped Chris who made a 97. Chris recorded a 9:53.2 – 97 for 999.2 in a fabulous contest.
Dillon flew first in the juniors and in tough windy conditions ballasted the 4.0 and went forward to the right with the other pilots. The pilot in the lane on the far left kept sliding left and made the best of the air stream flowing from the east. We were too far right to get to him so we surfed the air until Dillon finally had to make commitment to land and did so flying downwind to the spot and turning directly above it to hit the 98. His 6:35 gave him 719 points which is now his drop.
Dominic’s launch was a direct tow took a line break on the 70 jap line and then he didn’t make it back to the LZ for a landing score so finally resulted in him taking a relaunch at 4:08 on the working time. His relaunch yielded a 4:07 – 97 for a score of 498.9.
Tristan flew his 3.8 with the aluminum ballast with a plan to simply hang out to the left where the air seems to be better. The plan was great as his lighter ballasted ship went up in the good air and he pushed forward when it was soft or sinking. Great when a plan comes together as Tristan made 9:52.2 – 90 for the only 1000 we scored in Rd 9.
Rd 10 started in similar conditions with a good 12 to 15 mph cool wind and very limited thermals where if you didn’t catch the ride early in the flight you were doomed to a relaunch. Jody flew the 3.5 with one brass with a direct tow which yielded a great launch and we followed the pack to the left slowly descending for 4 minutes before a bubble came through and some in the group started to turn in it at about 200 feet over the hangar. Once we saw they were getting away Jody decided to join them and entered the area lower and took half a dozen turns without making it work before having to return to the field to take a landing.
This being Jody’s second hit meant that would end his campaign to be in the fly-offs. It had been an amazing performance but the windy light lift conditions finally caught us out.
Daryl flew in a group in Round 10 immediately following Jody and he went off to the right fairly deep and burn up the clock for 4 minutes before the pack hooked up on the left and started getting out. Daryl traversed the whole field to reach them at less than 100 feet and managed to find the bottom of their air to make turns. It was majestic to watch his model rise every turn getting higher and higher out climbing the models that started higher, always going deeper over the city of Martin. In the end he had to come home and though at times it looked like he would return triumphantly to the LZ finally the strong wind prevailed and he finished up short of the field for a zero. It was a terrible way to end the day as we went from the top of he leader board I the seniors to we don’t know where yet. We haven’t got final scores yet because of a computer malfunction.
It has been a rough day for USA.


Scores for seniors at end of Round 9 were finally posted but they don’t reflect the carnage from the beginning of Rd10. 🙁 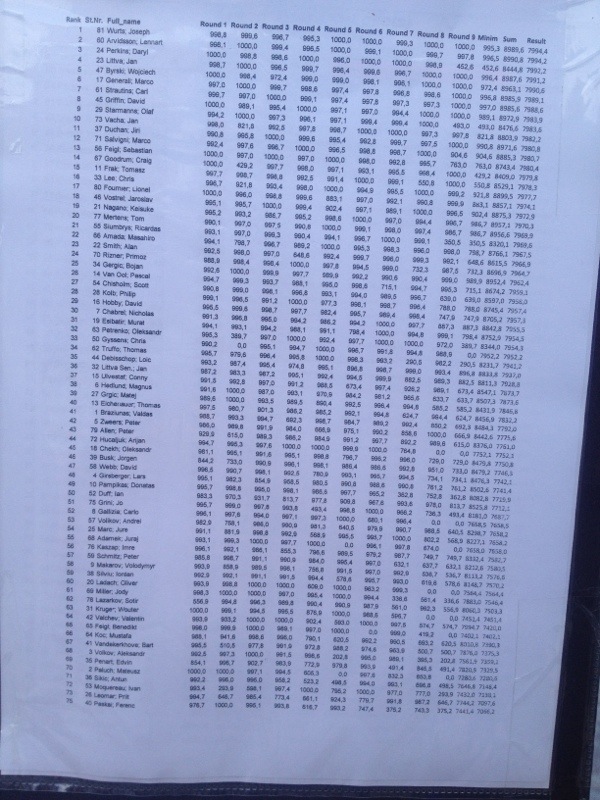