Precision contest conditions greeted us on Saturday morning with a blue sky a warming sun and guess what? The wind that has perplexed us for two days and seen our scores drop alarmingly is now completely gone. That also means we will have great difficulty in moving up the ladder as scores are sure to be close.
Juniors were first up with Dillon taking a 2 second tow to an easy read and an easy 13 minute ride drifting slowly toward the nearby village. Dominic also got out and both juniors returned to the LZ for good scores. Dillons was a 14:56.6 and 98 for 996 points while Dominic recorded a 13:52.1 and 93 for 987.4 points
The 5th junior round followed with Dillon taking a super short tow and hooking up again for a long slow climb out to make a great time of 14:58.6 – 99. Dominic made the time and stayed in the hunt with a 14:49 – 96. Dominic moved into 5th place and can possibly make the podium with a good 1000 in the final round once the drop kicks in.
After the 5 rounds the leader is Marco Gallizia of Italy on 4993.8 followed by Max Finke if Germany on 4989.8 and Nikita Sholom of UKR in 3rd with 4816.4

Rd 4 of seniors was next and super shirt tows were the name of the game in the beautiful, sunny and windless conditions. The first launch produced a dramatic midair on the zoom between Craig Goodrum and Jaroslav so the whole group was relaunched. An uneventful copybook shorttow and thermal flight followed which was won by Jan Littva with a 14:58.8 – 100. Wojciech Byrski made 14:57.7 – 100 and 999.8 points and Joe managed a 14:58.3 – 99 for 999.4 points to keep them honest. Carl Strautins made a really shorttow but failed to hook up and had to relaunch.
The Rd 5 flight was similar with short tows the order of the day and an easy ride out for most of the group. The exception was Craig Goodrum who launched a model that appeared to lose control and turned and ploughed straight into the camping area. The remainder of the flight was uneventful and they returned to land. Jan Littva took the 1000 with a 14:56.6 -100 and 1000 Joe was second with 14:57.4 -99 for 998.7 and Wojciech Byrski was third with 15:56.9 -98 for 994.9
The Final junior round was flown in simply magic conditions and I tensioned Dillon up for a super short tow. He got off as quickly as possible and ran crosswind to the read we had 2 minutes before launch and hooked up in soft lift to put in a relaxed final flight in this World Championships. With nothing to lose he once again pushed the clock to make the touchdown with .5 sec to spare and nailed the 100 for another great 1000 point round. His flight time was recorded as 9:58.7. Dominic put in a solid flight also and was our best USA Junior pilot finishing the worlds in 4th place just 16 points behind the eventual winner of Marco Gallizia of Italy. Max Finke of Germany was second and Nikita Sholom of UKR in 3rd

The final senior round was also another precision contest with short tows and an easy out. The final result saw with the drop included Jan Littva the winner (after coming so close in Sth Africa) with Joe 2nd and Wojciech 3rd.
Jan was showered with champagne as he came off the field amid many cheers as the local boy came good on home turf.
The presentations are this evening at the banquet and we leave on a bus back to Vienna at 3:30am in the morning. 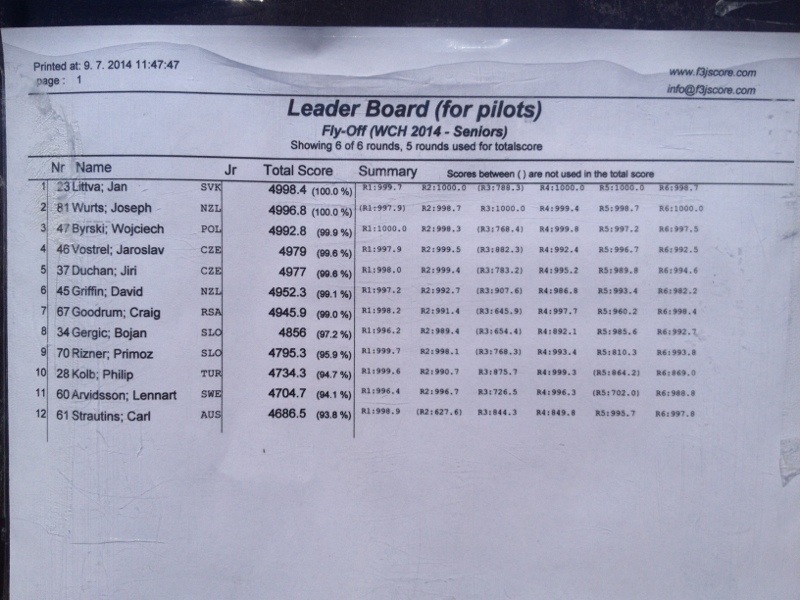 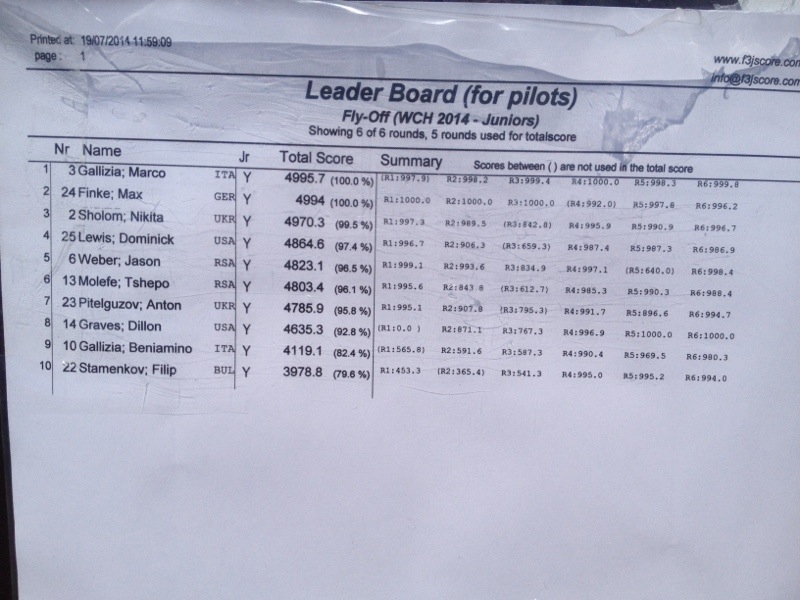